The new M1-powered MacBook Air is hilariously fast, and the battery lasts a long-ass time.

If you stop reading this review immediately after this, then know that unless Windows virtualization is a requirement of your workflow, you should probably just go ahead and sell your old MacBook Air immediately and get this thing instead.

Assuming you’ve got a grand or so lying around that you weren’t going to spend on something else. But hey, if you do, then I can confidently tell you that in spite of what a legion of Doubting Thomases (including me!) might have said about Apple’s freshman effort at its own PC silicon, it is now my studied opinion that there are far, far stupider ways to part with your cash.

A quick caveat on this “review” 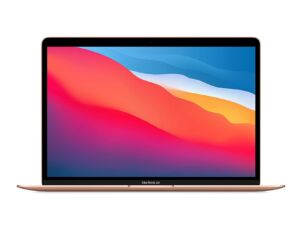 (Ars Technica may earn compensation for sales from links on this post through affiliate programs.)

Apple provided Ars with a couple of M1 Mac Minis for review. One of those went to Samuel for him to write up, and the other went to Jim for him to do his silicon analysis. Apple declined our request for any model of M1-powered laptop.

The MacBook Air being reviewed here is my personal device, which I bought shortly after the unveiling event. I’ve written this as quickly as possible after receiving it, but I had to wait for the device, which is why you all had to wait for the review. (This is also why it’s in kind of an intermediate configuration, rather than stock or maxed out like most review devices—I bumped the RAM up to 16GB and the internal storage up to 1TB, because that’s what I wanted.)

Because this is my device, I’m coming into this review from a slightly different perspective than some of the other publications doing MBA reviews. I’m not going to tell you why you should buy a MacBook Air, or how it might work for you. But I am going to talk about what it has been like to own it for a few days and how the device fits into my life. I do most of my power-user stuff on the desktop rather than on a portable, but I do occasionally need to leave the office and hit the road—and the M1 MBA is going to be a great traveling companion. You know, once we can hit the road again without worrying about plagues and stuff.

Tripods. Lights. Gotta iron the big white sweep cloth so I’ve got a background for pix. Gotta try to remember where the DSLR battery is.

It’s the oddest part about working for Ars, even after going on eight years. Your technology buying experiences are not always your own—sometimes the Ars readership comes along for the ride.

So after unboxing, I logged on and ran some benchmarks. That’s the first thing you have to do when you’re reviewing—you either do the benchmarks first, or you do them dead last, and I wanted to get them out of the way because this was, you know, my laptop, and I’d actually like to use it for stuff rather than having it be tied up running battery tests for 20 hours at a time.

Only a few days earlier, I had used my living room HTPC—a base-config 2018 Mac mini—to do the entire set of Mac comparison benchmarks for Samuel’s Mac mini review. I had a pretty good feel for how quickly the Intel mini’s hex-core i5 banged through each of the tests, since I’d just seen the numbers, and from talking to Samuel and Jim I was anticipating the new MBA’s M1 would beat the Intel-powered mini.

I just didn’t realize how hard a beatdown it would be.

Getting the benchmarky bits out of the way

So here’s how fast it is in a bunch of charts and graphs.

According to Apple, the MacBook Air’s M1 is voltage-limited in order to function within the fanless design’s thermal envelope. iFixit’s teardown shows in detail that the Air’s M1 cooling setup is an entirely passive affair, with just a heat transfer plate in between the M1 CPU and the aluminum body. I was expecting performance similar to but perhaps a bit lower than the M1-powered Mac mini, and that’s more or less what I got. However, the Air’s M1 is good for at least a few solid minutes of full-bore Firestorm core performance before it throttles back.

In benchmarking, I noticed that subsequent runs of the Final Cut Pro export would slow down dramatically—the first export would complete in about 1 minute and 19 seconds, but if I immediately repeated the export it would take a bit under 2.5 minutes—and the Air would be quite warm to the touch. After closing the lid to hibernate until the Air was cool and then repeating the export, the time was once again in the 1:20-ish range.

To create some more sustained load, I cloned the source video three times and then repeated the export process. Starting from a cold startup with the MBA’s chassis at ambient temperature gave a result of 4 minutes, 21 seconds. This time, I opened Activity Monitor’s CPU graph to spy on the core utilization. All eight cores were engaged until about 2:56, at which time half of the cores—presumably the high-performance Firestorm cores—dropped to less than 50-percent usage and stayed there until the run completed.

A second run immediately after that took 7:37—not quite twice as long, but heading in that direction. Activity Monitor’s CPU usage graph showed half of the cores (presumably the high-performance Firestorm cores) at half utilization for the entire run.

Further testing—including several runs after letting the MBA sit powered off for about an hour to make absolutely sure it was cooled to ambient—failed to produce anything resembling a precise, repeatable time interval for when throttling starts. The best I can do is to say that it seems that when you throw a heavy workload at the MBA, it runs at full-bore until the Firestorm cores become too toasty, which seems to take anywhere from 3-ish to 6-ish minutes. Then it backs the Firestorm cores off until they show about 50-percent utilization, and the amount of heat generated at that level seems to be within the sustained thermal capacity of the design.

(These are subjective measurements, taken in whatever indoor ambient conditions happened to be happening in my house as I was doing the testing. Your results may vary.)

I hate USB-C charging, give me back MagSafe

The other major thing for a portable like the MBA is battery life, and we’re going to talk about that. But first, very briefly, the loss of MagSafe sucks.

Yes, I know I’m late to the discussion. I know MagSafe was deleted a few hardware revisions ago, but I’m going from a MacBook Air with it to a MacBook Air without it, and plugging in a USB-C cable feels like going back to the freaking dark ages. I’ve been happy with MagSafe plugs on my laptops for almost an entire decade—that quick one-handed snick into place, that easy no-fuss pull to disengage, and that friendly LED to tell you when you’re all charged up.

Having to shove a connector into a high-friction plug—often requiring two hands, depending on how you’re holding stuff—is stupid. It’s just stupid. This is a customer-hostile regression in functionality. I’m sure there are excellent reasons for it and that it saves Apple money on the MBA’s bill of materials and on warranty support, but I hate it and it’s terrible. This is not the premium Apple experience I feel like I’m paying for.

I used the M1 MacBook Air for work all day one day, filling up about 11 hours of on-the-clock time with Slack, emailing, Zoom conferencing, Messages, and Web browsing, and the Air still had 40 percent remaining on the battery meter when the day was done. This is considerably longer than my old 2015 MBA, which throws in the towel around hour five. (Unlike with the official battery test, my unofficial workday usage test was done with adaptive brightness and Night Shift enabled, and there was a fair amount of idling.)

In the official Ars battery test, with the screen locked at our reference brightness of 200 nits, the M1 MBA lasted for 877 minutes—a bit over 14.5 hours. Charge time back from almost dead to full took a bit over two hours with the included 30W adapter, with the device powered off during the charge.

But I don’t usually spend the day working on my laptop—instead, the place where my old MBA most often lets me down is on long flights. Living in Houston means I usually fly United, and United is particularly miserly with power plugs—if you don’t get certain specific seats, you’re out of luck. In my experience, my Intel MBA is good for three, maybe four hours of movie watching before it’s dead as a doornail—so if I’m flying to California or pretty much anywhere that’s more than a couple of hours away and I don’t get a power outlet seat, I know I probably need to bring a book.

The M1 Air laughs at my old MBA. It laughs at it, gives it noogies, and flushes its head down the toilet in the locker room.

I left the M1 MBA playing 4K Westworld episodes from the UHD BluRay box set, full screen and at max brightness, with the sound blaring at max volume. I finally gave up and shut the laptop off after ten hours, at which point it still said it had 13-percent battery remaining. That’s not only long enough to last out any domestic flight—that’s enough to last you an international flight from the US to Europe.

A quick note on resuming from sleep: during the Air’s reveal, Apple showed off how quickly the Air resumes from standby by having Senior VP Craig Federighi lift the lid of a sleeping MacBook Air and peek in, all set to the mellow sounds of Barry White. While I can’t say that Barry White plays when I open up my laptop, I can say that the M1 Air wakes from sleep very quickly. It’s not that it’s faster than my Intel-powered Air, since the 2015 model will sometimes wake up instantly, too—but the 2015 Air also sometimes takes a second or two to blink on when I lift the lid. The M1 Air is much more consistent—I’ve only had the thing for a few days, but every wake-from-sleep has been lightning quick.